rabbitELITEtrail athlete, Jake Jackson competed for Team USA in the 24 Hour World Championships last month! Read all about his incredible experience and an amazing top 10 finish!

Life and ultra running share many similarities. If you're not very good at adapting to problems thrown at you, you'll never be very good at either one. 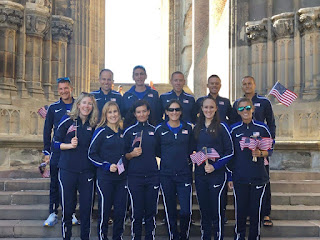 I was fortunate enough to be selected to run for team USA at the 2019 IAU 24 Hour World Championships in Albi France, held on October 26th. My qualifying distance of 157.589, run at last years Desert Solstice, placed me in the number 3 spot on the men's team consisting of Olivier LeBlond, Rich Riopel, Steve Slaby, Harvey Lewis and Greg Armstrong.

Both the US men's and women's teams were comprised of some the the best ultra runners in the world and I was feeling extremely under experienced compared to my teammates. My training leading up to the race had been going well and as the race day closed my confidence grew. Experienced or not, it was only running and I knew how to do that. 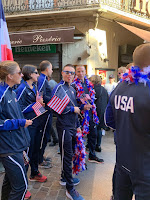 After a long flight out of LAX the family and I settled into one of the host hotels, Grand Hotel d' Orleans.  Jet lag was nothing I had ever dealt with so I was happy to arrive a few days early.  We had one day of team meetings, team photos, and sightseeing.  Then, the Friday before the race, the 45 teams from all around the world gathered for a opening ceremony parade starting from the Sainte Cecile Cathedral and ending at The Grand Theatre. While the town of Albi isn't very big,  it has a rich history and is quite beautiful. 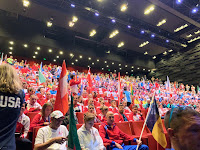 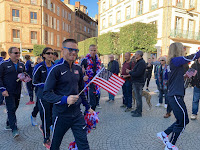 The race started the following day at 10am under clear, cool skies.  The coaches, crew and athletes frantically got the aid tent prepared and before long the race was starting.  The plan prior to the race was to have my wife Missy crew me while the kids were looked after by my mother-in-law.  Unfortunately my mother-in-law fell ill before our flight and couldn't make the trip leaving me without a designated crew.  We got word the day before the race that only a handful of passes were to be given to each team limiting the amount of crew available.  Thankfully Camille Herron's husband Conor offered to crew the both of us so things were set.

The few moments before the starting gun was sounded I had an overwhelming feeling of pride to be wearing the American flag on my chest and to be able to represent our country, on the highest level of this sport, was all too surreal.

The race takes place on a looped 1500 meter course.  400 meters on the track inside the Albigeois Sports Stadium, the rest on a slightly uneven blacktop and concrete surface around the stadiums perimeter.  We started on the opposite side of the stadium so getting to run past the crowds and all of the aid tents only added to the electricity. 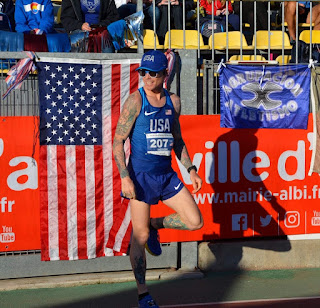 My nutrition plan was to take one Spring Energy gel every 30 minutes and consume one bottle of water mixed with Spring Electroride every hour.  The first 6 hours went off without a hitch averaging 8 minute miles and feeling very comfortable with my effort.  Conor was putting one of each of the two gels types into the pocket of my Orange Mud handheld which made hand offs at the aid tent flawless.  Every 30 minutes it was consume gel, drink fluids and drop bottle a lap later.

The day started to warm and I noticed quite a few runners using ice bandannas but there was a nice breeze and I wasn't sweating nearly at all so I continued on without needing any extra cooling.  There were two stations set up along the course that had tubs filled with cold water and sponges so I'd occasionally dip my hat or hands into it to clean my face and stay cool. 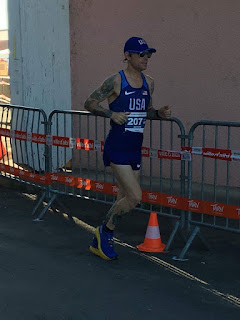 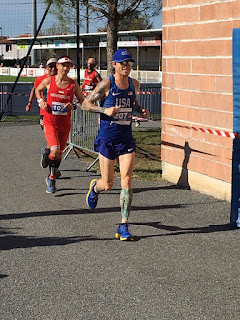 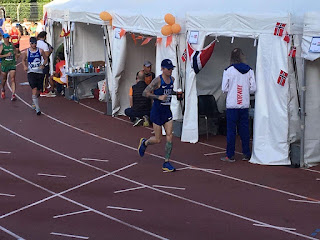 Hours 6-12 my pace had fallen between 8:15-8:25 but my legs were still feeling good.  By this point the winds had picked up some and there were a few stretches outside the stadium where you'd turn a corner and get blasted.  Some drafting techniques I'd learned marathon racing came into play but we were all grateful to be out of the heat heading into the cool night.  I was sitting in 10 place at the end of 12 hours and feeling determined to help the men's team secure a podium spot.  Steve and Greg were having some issues earlier but I wasn't that much ahead of Olivier, Rich, and Harvey so we were still on the hunt. I believe at this point we were sitting in 5th place but had heard the Japan team was starting to falter and losing steam leaving the Hungry, France and Poland team still ahead.

Hours 12-18 was where things started to get somewhat more difficult.  I was still able to click off miles at a decent pace but Conor was trying hard to get Camille on track and our communication each lap was starting to be interrupted.  There was a few laps I was expecting a bottle or something else I needed that got missed.  Thankfully 1500 meters isn't very long but this late in the race a missed hand off can mess with your mind and rhythm.  Not having Missy crewing and knowing exactly what I need was difficult but I was determined to make the best of the situation and keep a positive mindset.

I had started to get some flavor fatigue from all of the gels and was relying on whole foods from the aid station.  Mostly dark chocolate, crackers and crushed Pringles in a cup.  Megan Alvarado, who unfortunately had to pull herself from the race due to an injury, thankfully offered to take over for Conor and crew me the rest of the race.  At some point I got the craving for some of the fries I kept smelling. Megan put out the word and the US coach Howard Nippert was kind enough to pick some up for me.  I don't think I'd ever been so happy to be eating fries and by the looks of the runners I passed I was causing some jealousy towards me.

Hours 18-24 were as you would expect rough.  The men's team had methodically moved up into contention and were charging.  I was sitting in 7th place and closing.  At 20 hours my legs were having a hard time staying underneath me.  I'd find myself leaning forward too much and with the momentum having to play catch up.  I knew we were close but 4 hours of running might as well feel like 100 when you've been at it for that long.  Rich had come up with a quad strain and was struggling so he was out of the top scoring 3. That left Olivier, Harvey and myself to go after gold.  Steve and Greg were still on course giving support and pacing whenever they could.

Greg, in-particular, was my saving grace the remainder of the race.  We shared many laps together and with his constant encouragement, motivation, and help with pointing out when I was leaning to far forward, I was able to move at a good pace. (Thank you Greg!! Despite not having the race you'd hoped for, you were a huge part of the success of my race and I will forever be in debt to you for your kindness and generosity.  I hope our paths cross in the near future my friend)

Sometime before the sun came up, crew chief Zane Holscher, gave word that if we all just kept moving the pace we were at we'd have gold locked up.  What an amazing thing to hear!! 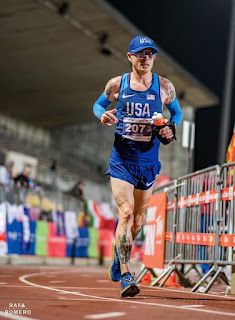 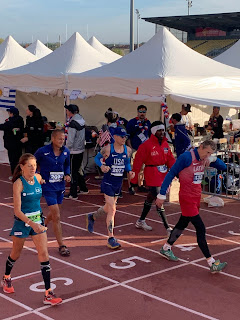 When the final second clicked off I couldn't quite grasp what myself and more importantly the US teams had accomplished.  I had just run nearly 7.5 miles further than I did at Desert Solstice on the biggest stage I had ever run on.  The monkey that had been on my back for nearly a year since was finally gone. I wasn't a one hit wonder.  My final distance places me 6th all time on the US list of 24 hour performances.  Just shy of legends Rae Clark and Scott Jurek.  Not too shabby for a truck driver. 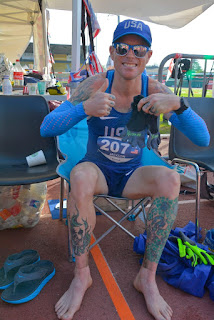